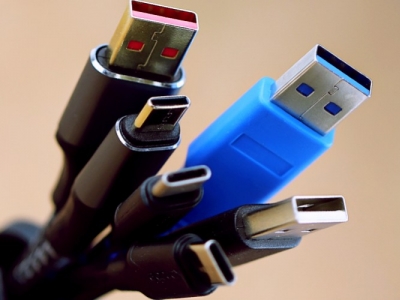 Thunderbolt! It makes me think of Thundercats cartoon when I was a child.  But what is it?  It’s not a cartoon that’s for sure but with the lightning bolt logo, it certainly looks a bit sci-fi.  With standards constantly being replaced to make way for faster data transfer rates, or refresh rates, Thunderbolt 3 is the newest connectivity standard from Intel and Apple which is double the speed of Thunderbolt 2 and combines USB, DisplayPort and power via a single USB-C connector.

Nowadays it seems like everything is getting faster, thinner and smaller and with a theoretical throughput of 40Gbps, Thunderbolt 3 is no different.  I say theoretical as it supports a data transfer rate of two 20Gbps or 40Gbps over two lanes in both directions.  It is symmetrical, reversible and can make you breakfast.  Just kidding!  And the benefits don’t stop there.  It, of course, delivers more power so will inevitably be used for faster charging and keeps up with the dual 4K displays.

Whatever your budget, Thunderbolt does come with a more expensive price tag compared to well established interfaces such as USB and Firewire and currently there are fewer devices available with this standard interface.  They know how to get us with this shiny new tech and one purchase leads to others as we buy new devices, striving to keep up with the evolving innovation.

It would seem that there is confusion between the Thunderbolt standard and the USB Type C, not least because the ports look identical.  The truth is that USB-C refers to the oval ‘C’ shape of the port and Thunderbolt 3 refers to the connectivity standard.  To compare equivalence, Thunderbolt 3 has new capabilities and runs on USB-C connectors and cables.  USB 3.1 is the new transfer mode SuperSpeed+ that can transfer data at up to 10 Gbps and also runs on USB Type-C cables as does USB 2.0.

Are Thunderbolt and USB-C interchangeable?

Have you been confused by the never ending list of new names for things that seem to be the same thing?  Thunderbolt 3, USB 3.1, Thunderbolt 4, USB4.  It’s all getting a bit crowded at the top as these standards try to be all things to all people.  We’ll attempt to summarise the various technologies and specifications in layman’s terms, so you can be sure you are buying what you need.

It’s kind of obvious that, in superseding Thunderbolt 3, Thunderbolt 4 will be faster and offer support for just about everything else out there, including the new USB4 standard, DisplayPort 1.2, and PCIe and all previous versions of Thunderbolt.  The new standard still uses USB-C and a provides 40Gbps bandwidth, however, Thunderbolt 4 takes things one step further with a new set of minimum performance requirements for video support, PCIe bandwidth, and more.

Just how much more things can be increased or improved remains to be seen but video support has been upped, with Thunderbolt 4 now boasting, at least, support for two 4K displays at 60Hz or one 8K display at 30Hz. Thunderbolt 3 can handle dual 4K displays with the right setup, but is only ‘required’ to handle at least a single 4K display to be called Thunderbolt 3.

Transfer distance is also increasing and Thunderbolt 4 will work with cables that measure up to two metres, with support expected to increase in the future. Devices below the 100W charging mark will need to include at least one port capable of charging.

USB4 is built on a Thunderbolt 3 framework, so many of its talents are the same. I mean, that’s what all these increases are, right?  Talents.  It is a minefield but the increases take USB4 from 20Gbps to 40Gbps, the same as Thunderbolt 3 and 4 and the newest standard of USB exclusively uses USB-C connectors.
Older versions of USB split the bandwidth between all connected devices and relied on split lanes for data and video with no crossover. With USB4, it doesn’t matter and the lanes can be shared for whatever purpose, allowing you the potential to hit the bandwidth ceiling.  USB4 will allow for dual 4K displays or a single 5K display, as well as up to 100W of charging power. Just like Thunderbolt 3/4.
It is well overdue but finally the aim of USB4 is to unify ports across devices and switch everything to USB Type C taking performance levels to compete with Thunderbolt 3.

It’s great that the new standards are compatible with each other, but only Thunderbolt 4 guarantees the increased port performance levels that power users need.  Thunderbolt 3 is still a great alternative and offers a lot more than USB3.1, but buying Thunderbolt 4 is the way forward if you want the fastest and best tech heading into the future.

We are expecting certified USB4 cables before Christmas 2021 so keep an eye on our new products.